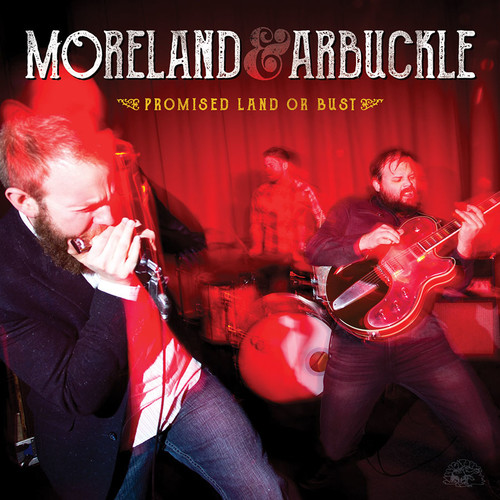 “Raw, dirty, primal and infectious…sizzling guitar, sturdy vocals and rude harmonica” –USA Today “Deeply satisfying...gritty soul and blues with garage overtones and fire-and-brimstone vocals” –Living Blues Guitarist Aaron Moreland—co-founder of the groundbreaking Kansas-based trio Moreland & Arbuckle—describes their music as “gritty blues and roots rock from the heartland.” Moreland, along with harmonicist/vocalist Dustin Arbuckle and drummer Kendall Newby, electrify raw Delta and Mississippi Hill Country blues, folk, and traditional country with unrelenting punk rock energy washed in hard-hitting Southern soul. Their songs are expertly executed with musical muscle and fifth-gear urgency. When they perform more traditional blues, they play with the same decisive command. With each of their six previous releases, the band has grown musically and lyrically, creating a signature sound while earning a large and loyal worldwide fan base. Their legendary raw and raucous live shows are played with wild abandon. The New York Post says Moreland & Arbuckle have “a raw juke joint exuberance with a dirt-under-the fingernails garage band attack.” The group’s evolution continues with their Alligator Records debut Promised Land Or Bust, produced by Matt Bayles (Mastodon, Botch, The Sword). From the howling cosmic opener Take Me With You (When You Go) to the stomping Mean And Evil to the plaintive Mount Comfort, Promised Land Or Bust is a far-reaching musical showcase. The instantly-memorable, slice-of-life songs paint scenes of double-crossed lovers, women meaner than the devil, and isolated loners beaten down by careless love. According to Moreland, “The new album is consciously traditional but still has the signature drive and power that we have crafted over the past thirteen years.” Moreland says signing with Alligator is a perfect fit. “One of our biggest influences ever, Hound Dog Taylor, was the very first Alligator artist. One of the reasons we have the non-traditional lineup of no bass player was inspired by listening to Hound Dog’s music as we were coming up.” According to Alligator president Bruce Iglauer, bringing Moreland & Arbuckle to the label known for its Genuine Houserockin’ Music was an easy choice. “I’ve watched this band grow from talented interpreters of raw, traditional blues into creators of fresh, original roots-based songs. Live, the energy just pours out of them.” From their 2005 self-release Caney Valley Blues to 2013’s 7 Cities on Telarc, Moreland & Arbuckle have grown from a fiery, crowd-pleasing duo to a genre-smashing three-piece band. Together, Moreland’s simultaneous bass, rhythm and lead guitar work and Arbuckle’s emotionally-charged harmonica and edgy vocals—driven by Newby’s propulsive drumming—create a sound that is forceful enough to grab a listener’s attention and nuanced enough to hold it. Now, with Promised Land Or Bust, Moreland & Arbuckle are ready to bust it all wide open. Arbuckle calls the new album “our best yet,“ and says, “we continue to evolve musically outside of the box we started in, but the bedrock—the blues —is always there.” Moreland adds, “We consciously went back to where we started and it took us to a brand new place.” That new place is clearly part of Moreland & Arbuckle’s never ending musical journey. And for them and their ever-growing fan base, there’s no turning back now.
This website uses cookies to personalize content and analyse traffic in order to offer you a better experience.
I accept Learn More
back to top