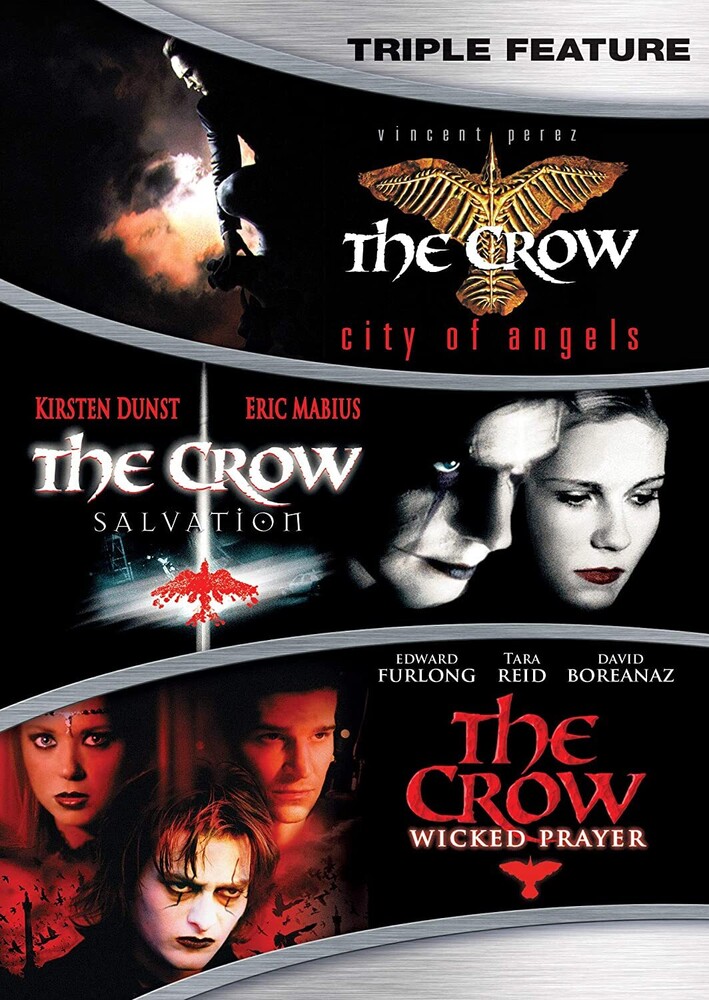 Includes: The Crow (1994)An eerie fantasy starring Brandon Lee (who was tragically wounded on set, and died hours later) as Eric Draven, a rock guitarist who is killed, along with his fiancée, on the eve of their wedding and returns from the dead as "The Crow" to seek revenge. Filled with expert action scenes and an electrifying rock score, this atmospheric adaptation of James O'Barr's comic series also stars Ernie Hudson, Michael Wincott, Rochelle Davis, and Bai Ling. 101 min. C/Rtg: R The Crow: City Of Angels (1996)They killed him and his son, but he's come back for vengeance. French actor Vincent Perez is the newest incarnation of the Crow in this stylish sequel set in a decaying future L.A. Mia Kirshner plays a tattoo artist who befriends the Crow as he takes on a dangerous drug dealer and his gang; with Richard Brooks and Iggy Pop. 84 min. C/Rtg: R The Crow: Salvation (2000)The third installment in the popular film series stars Eric Mabius as a man who returns from the dead after being wrongly executed on his 21st birthday for the brutal stabbing death of his girlfriend. While searching for the real culprit, Mabius joins forces with his girlfriend's sister (Kirsten Dunst) in a quest for justice that reveals a conspiracy within the police department. Fred Ward, Jodi Lyn O'Keefe, and William Atherton also star. 102 min. C/Rtg: R