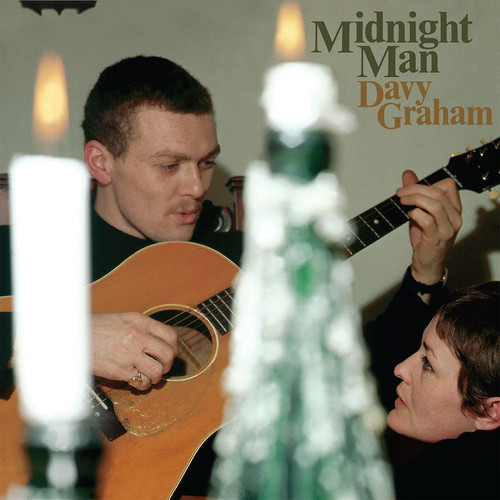 Davy Graham is recognized as an early influential figure on the 1960s British folk scene, where he inspired many famous practitioners of the fingerstyle acoustic guitar such as Bert Jansch, Paul Simon, John Martyn and indeed Jimmy Page. Not one to be categorised Graham could be seen as a true world music artist covering the genres of folk, blues and jazz. He also popularized DADGAD tuning, later widely adopted by many acoustic guitarists. "Midnight Man" was Davy's 2nd solo release for Decca and showed notable growth as he was actively changing and extending himself musically. The playing here was more extroverted and more aggressive, musically, a result of his increased experience and growing maturity as an artist. Recorded following his travels to Ibiza, through the Aegean and on to Constantinople, he was deeply influenced by the sounds he heard, and - in contrast - was experimenting with amplification. The resulting work was rich in it's experimental approach to conventional blues and modern jazz pieces, and his incredible excursion with Lalo Schifrin's "The Fakir" was the instrumental 'hit' on this album, just as "Maajun" was on his groundbreaking "Folk Blues and Beyond" record. Remastered, with liner notes by David Fricke.