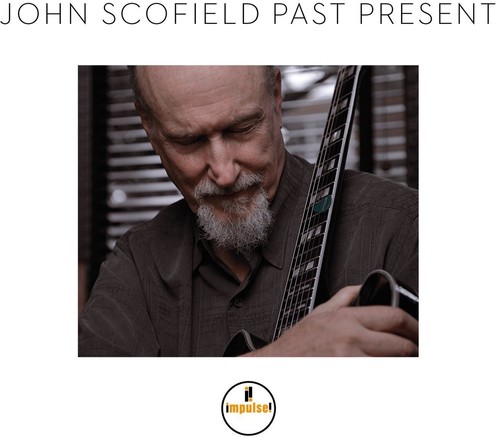 John Scofield updates his early-90s quartet with drummer Bill Stewart and saxophonist Joe Lovano by recruiting bassist Larry Grenadier for his fetching, appropriately titled impulse! debut, Past Present. Between 1990 and 1992, the celebrated guitarist released three well-received discs Meant to Be, Time on My Hands and What We Do for the Blue Note label as the John Scofield Quartet. On those records, either Marc Johnson or Dennis Irwin played bass. Nevertheless, Grenadier also has history playing with Scofielld; he toured with Scofield in support of the 1996 disc, Quiet.

The nine exciting tunes Scofield penned on Past Present also reflects his philosophy on playing jazz music. He stresses the importance of being knowledgeable of the musics deep, complex roots while simultaneously being spontaneous and in the moment while performing it. For an artist with such a multifaceted discography as Scofields, getting to the root of jazz means channeling the blues, as demonstrated on the discs closing, titled-track.

Johns love for R&B and blues tends to inform all of his discs regarding of idiomatic styling. After all, his first guitar hero was the legendary B.B. King, who strummed very vocal-like single-note melodies. Singable melodies and infectious rhythms shine on the soul-jazz opener, Slinky, on which the guitar tickles an instantly catchy riff before Stewart underscores it with a supple 5/4 groove that suggests New Orleans second-line rhythm. Grenadier propels the momentum with a loping blues bass line while Scofield and Lovano trade soulful licks and tasty solos.

Past Present also highlights Scofields love for country music on the whimsical Chap Dance, which evokes both the wide-eyed Americana compositions of Aaron Copeland and the hoedown sophistication of Ornette Colemans harmolodics. Scofield says that the songs exuberant opening melody and spry rhythmic pulse remind him of Richard Rodgers and Oscar Hammersteins 1943 Broadway musical, Oklahoma!, particularly the scenes with the cowboys dancing in chaps and vests.

As Scofield continues to solidify his reputation as one of modern jazzs most dynamic guitarists, history will reveal Past Present as an integral chapter in his expansive discography one that reflects him being more reverential than referential to his personal and professional past while remaining fresh and ever-present.