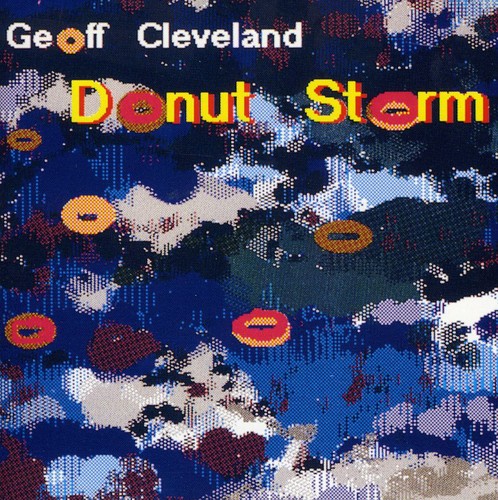 Celebrating it's 20th anniversary is Hate Camels leader Geoff Cleveland's debut album 'Donut Storm'. It contains eleven original acoustic jazz compositions, ten by composer Geoff Cleveland and one by his brother John Cleveland. Half of 'Donut Storm' is in the classic 'jazz piano trio' format, featuring Cleveland on piano, Artie Moore on bass and Sarah Hommel on drums. On the other half, the trio is joined by tenor saxophonist Keith Oxman and Mark Raphael on flugelhorn and trumpet. The Geoff Cleveland compositions on this album were written between 1983 and 1992 and inspired by the classic jazz albums of the '50s and '60s, especially those on the Blue Note and Prestige labels. Jazz composers who inspired the pieces herein include Wayne Shorter, Horace Silver, Charles Mingus and Andrew Hill. In the twenty years since the 'Donut Storm' session, Geoff Cleveland has gone on to lead or co-lead three more bands (The Emergency Broadcast Players, tissues4issues, and the current Hate Camels) and produce five more CDs. Also, saxophonist Keith Oxman has released seven CDs as a leader on the Capri label, drummer Sarah Hommel has released a CD which features her drumming as well as her vocals, and bassist Artie Moore has recorded with Ginger Baker, Ron Miles, and many others. Music from 'Donut Storm' will be featured in the soundtrack of the upcoming documentary 'Neal Cassady: The Denver Years'. CADENCE MAGAZINE REVIEW by Paul B. Matthews (issue Vol. 19 No. 11, November 1993) Among the offerings on Cleveland's menu of music, you'll see titles like 'Donut Storm' and 'Fat on the Wing'. All were published by Ear Fudge Music and released on Cookware Records. So don't be startled to find that you've subconsciously surrounded yourself with bags and bowls of munchies before sitting down to listen to his music. Then again, like a tasty snack, once you start listening to his music you'll likely keep going back for more until it's all gone. As convenient as it would be for me to be able to continue this metaphor, the truth is that Cleveland was not inspired to name these compositions because he wrote them in his salad days or was hungering for recognition. They instead reflect his being an active member of the Denver jazz scene. The title tune, for example, was written during a Rocky Mountain blizzard where the flakes appeared to be as big as donuts, while 'Fat on the Wing' refers to a Denver sports figure and his favored spot for making scores. All the scores on this debut release but one were written by Cleveland, a graduate of North Texas State. He studied as a professional with Jaki Byard, which may have inspired the diversity they reflect. On one hand, 'Hill Climb' with it's individualistic performances, has the kind of rugged, challenging feel that title implies. On the other, "College Collage' with just Cleveland and rhythm, has an introspective, studious feeling. All of his compositions share one thing in common. They do hold your interest. Lots of things happen within each tune. It's like driving through the Rockies where the same mountains will be in front of you for minutes at a time but with each turn in the road you glimpse a different vista. Without so much thinking about it as simply becoming aware of it, you'll find yourself increasingly fascinated with, say, what he has the bass working on in the background on this tune or that one, how he alters the feel of the tune by having the horns alternate between staccato bursts and flowing lines. Speaking of which, all due credit must go to the players on the date who make all these things happen. As for his own playing, taking 'Mowin' the Lawn' as an example, if he attacks that chore in real life with the same zest and energy he applies to it's musical namesake, you may want to hire him to come do your yard! With no further pun intended, Cleveland has given serious thought to filling 'Donut Storm' with some very appetizing music. Music that you'll do well to sample.
This website uses cookies to personalize content and analyse traffic in order to offer you a better experience.
I accept Learn More
back to top