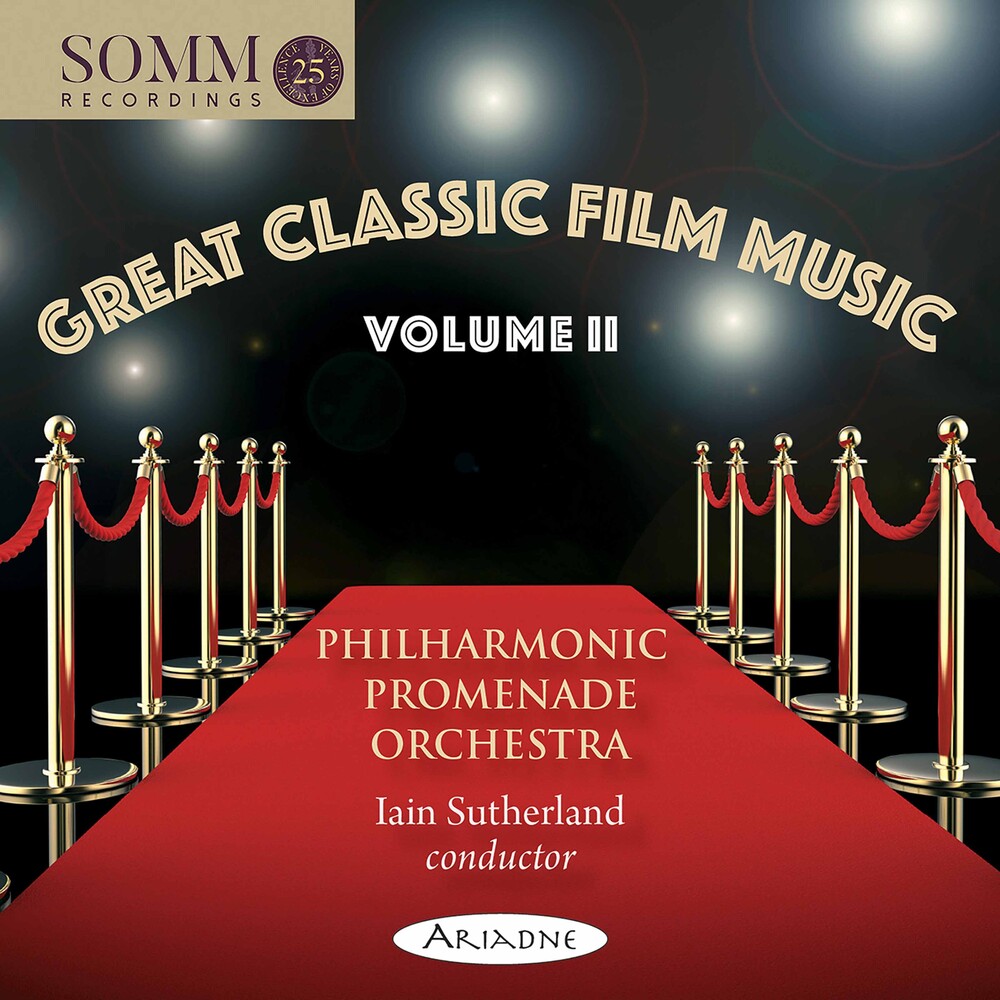 Lights, Camera, Action! As SOMM Recordings says "Hooray for Hollywood" with it's second volume of Great Classic Film Music featuring the Scottish- born maestro Iain Sutherland directing the Philharmonic Promenade Orchestra of Hilversum. The first volume of Great Film Music (Ariadne 5006) was hailed by Classic FM for "bringing together the finest music cinema has to offer" and featured by John Brunning as his 'Drivetime Discovery'. This second visit to the Golden Age of Hollywood and it's unforgettable successors is taken from live and studio recordings from 1988-95 that conjure up all the drama and romance, poetry and playfulness of film music at it's most gloriously entertaining. A half century of unforgettable music is captured here, from the swashbuckling romance of Erich Wolfgang Korngold's The Sea Hawk to the sci-fi heroism of Jerry Goldsmith's Star Trek: The Next Generation. Cinema icons John Williams (Back to the Future), John Barry (You Only Live Twice), Maurice Jarre (Lawrence of Arabia) and Lalo Schifrin (The Eagle Has Landed) are heard alongside the late, great Ennio Morricone's 'Gabriel's Oboe' (The Mission). Love and romance feature among the thrills and spills of Burton Lane's Finian's Rainbow, Kurt Weill's September Song, George Gershwin's Funny Face, Robert Stolz's Spring Parade and Cole Porter's sparkling songs in Evil Under the Sun. Two towering figures of the concert hall are also heard, with Elvira Madigan's sublime borrowing from Mozart's Piano Concerto No.21 and rousing and lyrical themes befitting their Shakespearean settings by William Walton from the Laurence Olivier starring and directed Richard III and Henry V. Iain Sutherland's previous SOMM releases include the "impressive... fully recommended" (Musical Opinion) Bernstein: Broadway to Hollywood (Ariadne 5002) and In London Town (SOMMCD 0117) with it's "sparkling performances of some of the cream of light music" (MusicWeb International).