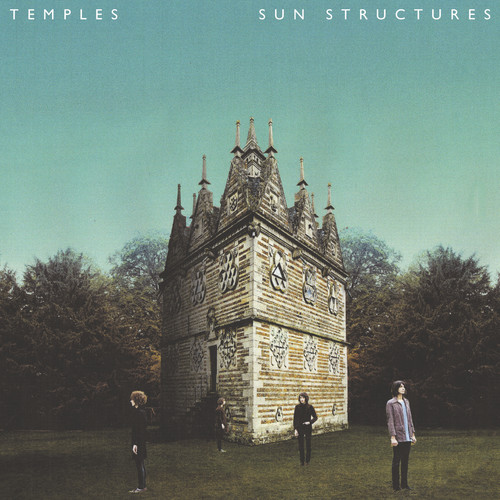 Temples are four young lads from Kettering who for all purposes sound like they just popped in from 1967 after a short trip on a paisley-bedecked TARDIS. They don't miss a single sonic trick; from soaring 12-string jangle to backwards-tracked guitars, flowing vocal harmonies, swooning Mellotrons, and baroque organ interludes, they know their musical history like they lived through it.

Their 2014 debut, Sun Structures, is a nostalgia trip for sure, while at the same time sounding totally modern too. The band's vocalist/guitarist, James Bagshaw, produced the album and he goes for a sound that's happily mired in the past, but has a cleanly scrubbed punch that gives the album some real power. For example, the drums have a kick that would have been hard to get in 1967 unless you recorded at EMI Studio Two with George Martin at the helm. Bagshaw and the rest of the band also prove to be masterful at layering sounds together, dropping parts in and out for dramatic effect, bringing in surprising bits of flair (like the harp on "Keep in the Dark"), conjuring up impressively diverse guitar tones, and generally making the kind of record bands wish they could have made back then. Many of Temples' contemporaries wish they could have made this record too, because not only does it sound amazing, but the songs are like a collection of hit singles mashed together in a 54-minute cavalcade of brilliant melodies, singable choruses, and mesmerizing rhythms. Chief among them is the album's first track, "Shelter Song," which kicks things off in the clouds with a divine melody and some hilariously pretentious but sweet lyrics, and really lets you know right away that the band is doing something special. The rest of the album flows from trippy psych pop ballads ("Move with the Season") to gaily skipping, Donovan-esque rambles ("Keep in the Dark") to hard-as-granite blues stompers with heavy guitars ("A Question Isn't Answered") to poppy tracks that bubble like melted chocolate and have a hard-candy crunch ("Mesmerise") to epic-sounding, slowly unspooling psych jams ("Test of Time") as Temples merrily grab everything from the past that works and effortlessly makes it work for them. The only possible complaint one might have with the record is that everything sounds just right, that it's maybe too perfect of a re-creation of the past without enough of their own personality injected into the proceedings. In this case, though, Temples play with enough energy, Bagshaw sings with enough angelically pure emotion, and the overall project flows with enough sonic imagination that they easily avoid the charge. Sun Structures is an impressive debut that would be legendary now if it had been released in 1967; in 2014 it's merely the best psych pop around.