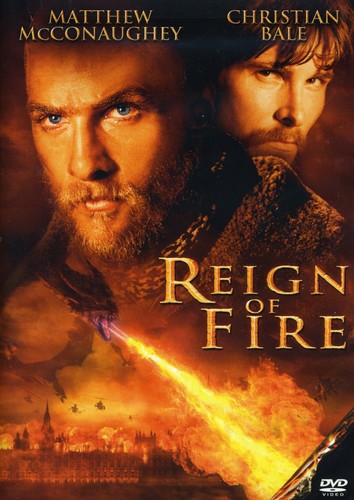 It would be fine if Reign of Fire were merely an incompetent slice of drivel.That it's such a profoundly unoriginal Frankenstinian mishmash of countlessnon-ideas cribbed from second-hand sources, well, that makes it a massive achievementin swill-mongering.

Mankind drills deep into downtown London and awakens a big dragon. Jump to twentyyears later: dragons have eaten everybody except Christian Bale and a groupof survivors that have taken refuge in a castle. One day Matthew McConaugheyshows up with a cigar and a beard and a tank and asks Bale to help him killthe dragons. Bale says no, then he says yes, then they ride to London in IzabellaScorupco's helicopter and kill the main dragon. Along the way, people getflash-fried by atrocious CGI. Sadly, none of them are the director or screenwriters.

Ladies and gentlemen, Hollywood has finally perfected Meta-Crap. This may beour cue to storm Los Angeles with torches.
This website uses cookies to personalize content and analyse traffic in order to offer you a better experience.
I accept Learn More
back to top