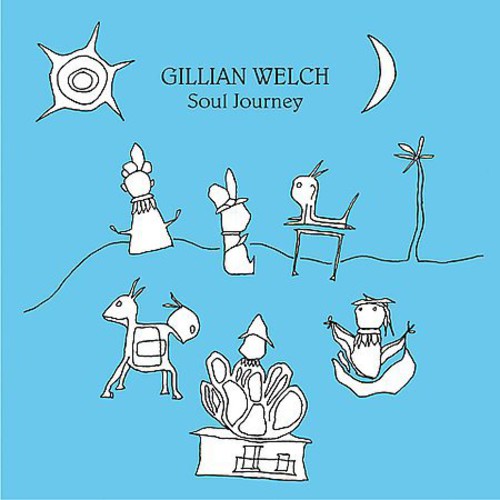 ''Soul Journey'' is the fourth studio album by Gillian Welch. As with all of her previous releases, it is a collaboration with her David Rawlings.

In their preceding work, ''Time (The Revelator)'', Welch and Rawlings had experimented with using only acoustic guitar and banjo as accompaniment. With ''Soul Journey'', they return to the more diverse and modern instrumentation of their early work, employing electric guitar, organ, and drums. As with Welch's other works, a strong American roots influence can be heard. This is perhaps most clear on the track, "No One Knows My Name", which borrows the melody from the Carter Family classic, "Motherless Children" and in Welch's reading of the traditional, "Make Me a Pallet on Your Floor". - Wikipedia

With her first three albums Gillian Welch carved out her own unique nichein American music, part bluegrass soul, part traditional country and part bedrockfolk, new songs carefully crafted to sound like they were a hundred years old,full of plainspoken truth and sporting sparse, but unforgettable melodies. In2001 Welch helped produce the "O Brother, Where Art Thou" soundtrack and won aGrammy for her efforts. After the Grammy win, Norah Jones asked Welch and Rawlingsto open for her spring tour of the U.S., which could be a pivotal point in hercareer. To augment the tour, Welch rushed out Soul Journey. In recent interviews,Welch has been touting the album as "more spontaneous" than her previous work,and that comes across in tunes like "Wrecking Ball" and "One Monkey," extendedvamps that go on far too long and are saddled with lyrics that lack Welch's usualpoetic precision. There are two folk chestnuts ("Make Me a Pallet on Your Floor"and "I Had a Real Good Mother and Father") with "new" words, but the new lyricsdon't go any further than the traditional words do, while "No One Knows My Name"and "Lowlands" both borrow the same progression Leadbelly used for "Man Goin'‘Round Takin' Names." Welch and Rawlings are still powerful players and thereare a couple of solid additions to their catalogue here, including "One LittleSong" and "I Made a Lover's Prayer," but most of the album is a disappointment.