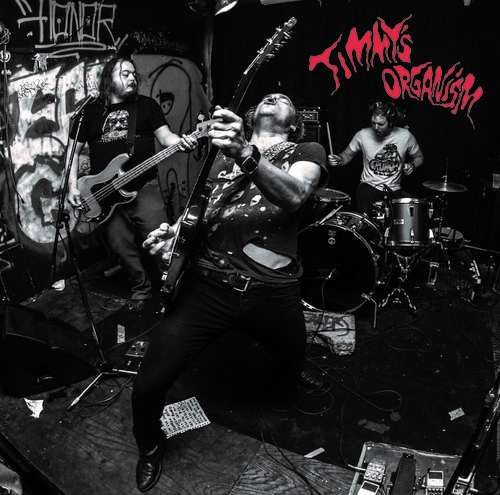 "Timmy Vulgar, Detroit’s favorite son, and most ambitiously amphibious creative force doesn’t need much of an introduction to anyone familiar with subversive punk music over the past decade and a half. He’s been such an irreplaceable figure in each of his musical endeavors since his emergence in such legendary acts such as the Epileptix and Clone Defects back in the late 1990s, right up through his shape-shifting efforts in the mollusk-like Human Eye and the prog-soaked Reptile Forcefield, and straight into his latest nerve-numbing scatterbomb known simply as Timmy’s Organism.” — Todd Killings, Hozac Records

How can KURT VILE fans sleep at night knowing that this fucking guy is out there, ruling the universe? Seriously, Timmy Vulgar - makes everyone else look like a fucking joke. — Mitch Cardwell, Maximum Rock'n'Roll

Couldn't have said it better ourselves, Todd. Working with Timmy Vulgar and his outfit Timmy's Organism means yet another dream come true for Third Man Records. Fronting some of the most original, compelling and unpredictable bands (not only in Detroit, but the world) for over two decades, Tim Lampinen’s work with the Epileptix, Clone Defects, and Human Eye has always held a rapturous cult following. Yet his work with his current trio, Timmy’s Organism, presents Lampinen (aka Timmy Vulgar) along with bassist Jeff Giant and drummer Blake “Bovver” Hill, ready for their close-up. With Heartless Heathen the group touches on their artistic and spiritual forbears of Captain Beefheart and Destroy All Monsters, while amply ramping up the slop culture rapture of classic punk 'n' roll like Chrome, Crime, and the Damned as well as contemporaries like Thee Oh Sees. There’s a reason why Lampinen won a $25,000 Kresge Grant for his work with his bands… he creates music that borders on art, live shows that border on theater. It’s high time the rest of the world take notice. Are you ready?

The full-length LP HEARTLESS HEATHEN will be released October 30th.