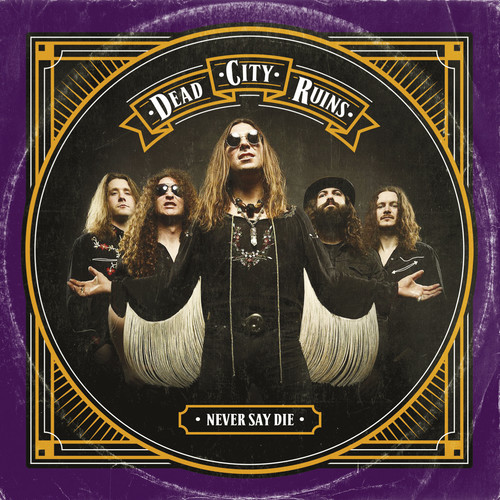 2018 release. For eight years now the band has been going strong without letting anything distract them from their mission. Dead City Ruins plow ahead with everything they've got, and you can hear this in every note of their album, Never Say Die. These guys play rock 'n' roll as if their lives depended on it. And in a sense, it actually does - as Jake explains; "In 2015, we sold everything we had, every single possession, bought flights to Europe and toured there for 10 months straight. That was hard, but awesome. Back in Australia, we spent all the money we made on this album. We really rolled the dice on this one. We wanted a great producer who knows what he's doing and knows the industry of today, not from the Eighties. His job was to help us make these songs as great as they can possibly be, whatever the cost." They found their guy in James Lewis, an Englishman who had previously worked with Arctic Monkeys and Sunset Sons. With Lewis at the helm, the band have accomplished exactly what they set out to do. Recorded in Melbourne, the album proudly shows all the passion which each musician put into every track: Never Say Die has power, and tons of it. It will knock you on your ass, just as all good rock 'n' roll should, but there's more to it than that. The music goes deep - as all really good rock 'n' roll should. After all, Led Zeppelin are more than Whole Lotta Love, Sabbath are more than Iron Man, and Soundgarden go beyond Outshined. Dead City Ruins play with the same intensity that made the iconic albums of the Seventies, Eighties and Nineties so special. In short, it has soul. This album lives, grooves and rocks, and what's more, it brings together passion and depth.
This website uses cookies to personalize content and analyse traffic in order to offer you a better experience.
I accept Learn More
back to top