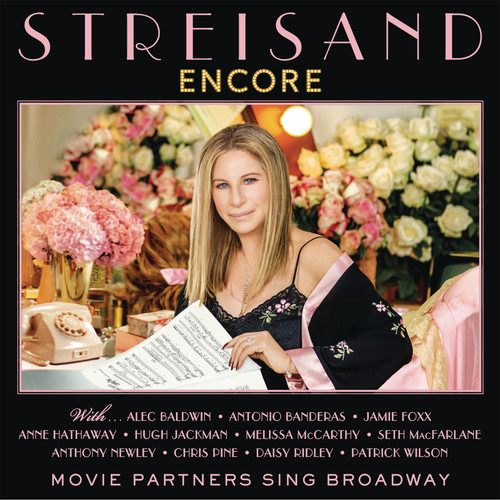 The greatest star to ever come out of Broadway, Streisand returns to her roots with "ENCORE: Movie Partners Sing Broadway." The legendary performer rose to unprecedented fame while starring on Broadway beginning with her stage debut in "I Can Get It For You Wholesale" in 1962 and then as comedienne Fanny Brice in the Broadway production of "Funny Girl" in 1964, earning Tony nominations for both turns. Streisand's vey first record album, 1963's "The Barbra Streisand album," which earned Grammys for Album of the Year and Best Female Vocal Performances, featured several Broadway standards. In 1985 Streisand released "The Broadway Album" and in 1993 "Back to Broadway;" both albums went multi-platinum.

With the longest span of number one albums in history - six decades - Streisand has recorded 52 gold, 31 platinum and 13 multi-platinum albums in her career. She is the only woman to make the All-Time Top 10 Best Selling Artists list. With the release of her last album, "Partners," Streisand has had 33 albums make the Top 10 on the US charts. She is the only female artist to have achieved this milestone, tying her with Frank Sinatra. With ten, Streisand is the female artist with the most number one albums in Billboard's history. Widely recognized as an icon in multiple entertainment fields, Streisand has attained unprecedented achievements as a recording artist, actor, concert performer, producer, director, author and songwriter. Streisand has been awarded two Oscars, five Emmys, ten Golden Globes, eight Grammys plus two special Grammys, a special Tony award in 1970, and two CableACE Awards the only artist to receive honors in all of those fields of endeavor. Streisand received the Presidential Medal of Freedom from President Barack Obama this past November. Her many other honors include the American Film Institute's Lifetime Achievement Award, the National Endowment for the Arts Medal, three Peabody Awards and the French Légion d'Honneur. She is also the first female film director to receive the Kennedy Center Honors. Streisand is a devoted philanthropist who works tirelessly to fight for what she believes in. A woman of action, Streisand founded The Barbra Streisand Women s Heart Center at Cedars-Sinai and co-founded the Women's Heart Alliance, helping to raise awareness and push for more research into women's heart disease, the leading cause of death among women.